The “Soulcial Distancing” edition of the Floetic Cypher will be held Jan. 16 at Hookie’s Restaurant in Ponchatoula, La. from 8-11 p.m. This event showcasing live poetry, music, and an open mic is being described as the perfect date night and will be hosted by Drea and Sean B. with performances by featured artists Toi the Poetic Beauty, Sam Lee Da Poet, and Shawan Rice alongside house poet Lance “Mr. Broadcast” Cagnolatti. There will also be vendors selling everything from art to exotic cheesecake and t-shirts. Only 40 people will be allowed to attend this event due to social distancing precautions, and masks will be required with temperatures being taken at the door. Cash will be allowed at the discretion of each vendor, and gloves will be worn by those choosing to accept cash.

This will be the event’s first installment since major COVID-19 shutdowns in March during a time when Bear, the creator of Floetic Cypher, contracted COVID-19 and remained in the hospital for a month. However, he’s back, better than ever, and, after getting through recovery and a few phases of shutdowns, is excited to bring back what he refers to as his therapy, the 5-year running Floetic Cypher. In addition to the upcoming Ponchatoula affair, the show has four destinations monthly (Slidell, Downtown New Orleans, Westbank New Orleans, and Hammond) but is looking to expand to as many places as possible to help grow and expand its reach to give artists the opportunity to express themselves, gain a following, and get connected to those searching for new talent, which is the goal of its creator. Speaking of, not only will A&Rs be in the building during this installment of Floetic Cypher, but a television network will also be making an appearance as well.

Are you someone who misses live music and art or an artist interested in networking while attending this exclusive event? Go to Eventbrite and search Floetic Cypher presents “Soulcial Distancing” to secure your tickets before they sell out! Are you a performer who misses the stage and longs to share their gifts in a room of people who will appreciate it? Be sure to DM @floeticcypher on Instagram after securing your tickets to be added to the list and receive additional details on the open mic portion of the show. Can’t attend this show but want to know about future Floetic Cypher events? You can also follow the Instagram account and stay tuned for the greatness ahead.

SoleMates Shoe Store will host its First Annual Pop-Up Shop and Fashion Show Saturday, April 7, at noon in the Lamar Dixon Expo Center of Gonzales, LA. The pop-up shop will be from noon to 5 p.m., and the fashion show will be from 7 to 9 p.m. Although presale ticket sales ended earlier this week, admission will be $15 at the door with a portion of the proceeds going to benefit The Women of Domestic Violence Foundation, an affiliate of The Butterfly Society founded in Baton Rouge. Well-known personality LaTangela Fay will be hosting and music artist Denisia will be performing while DJ Child Support controls the turntables.
There will be 56 fashion vendors catering to everyone’s stylistic needs along with 7 food vendors and a concession stand for those seeking refreshments. Giveaways will take place throughout the fashion show, and, while only cash will be taken for admission at the door, designers may be able to take major credit and debit cards.
In addition to giving consumers a place to find fierce fashion and benefiting a great cause, one of the main reasons owner Brelle Ford decided to create the fashion event was because she wanted to inspire others, especially small business entrepreneurs, to step out on the faith that God has given them. This event may be the first of its kind, but it will not be the last because Ford hopes to host this annual event for years to come. To get more details on this event and keep up with future events hosted by SoleMates Shoe Store, you can follow the business’s Facebook page, or its Instagram page @solematesshoes , as well as owner Brelle Ford @iambrelleford.

This past Good Friday, rapper Sean Elliot released the music video for his single “Cool” from his current project, Preface, presented by R.E.H.A.B Music, which is available on Spotify. The music video takes place throughout the city of Baton Rouge and gives the feeling of having a chill night out as Sean Elliot is seen hanging out and driving through some of the city’s most known areas past places like Downtown Grocery and Schilttz and Giggles. “Cool” is a laid-back track meant for listeners to just ride and vibe to; it gives similar vibes to the throwback track “Swang” by Trae. In the song’s chorus, he repeatedly says, “This sh*t cool, my ni**a, it’s like me”. This statement is proved to be true time and time again as those who have met the rapper or even just listened to his music will be able to tell he has a laidback nature akin to this single and music video.
As the video goes along, he details some of his everyday experiences and things about him, such as his influences which include MJG, Master P, and Scarface, which can be heard in his smooth flow. So, if you’re looking for good riding music, “Cool” may be just what you need. The “Cool” music video is available for viewing at ThaAntidote.com as well as YouTube.
Written by Christie “Caleico” Patrick

In honor of National Women’s History Month, #FadetheFlow Sunday became #SlaytheFlow as seven female rappers took center stage at 7 p.m. at Uppercuts Barbershop in Baton Rouge, LA. Tubbi of the Nerdy Bird Site and ThaAntidote.com hosted the event while DJ Legatron Prime spun some of the greatest throwbacks and DJ Slice Dat provided free food, including delicious red beans. Keith Cooper of Blerdish was also on the scene to educate others about the podcast and promote some of the ethnic comics on the market.
After an hour of mingling, Tubbi got the crowd’s attention with a warm welcome and introduction of the first performer of the night. First up was Miss Nina representing Lafayette. She gave the crowd an energizing start as she performed singles from her new mixtape, Tomboi Diva Volume 1: The Beginning. Vitamin Cea stepped up next to deliver an initial dose of Jackson, Mississippi with songs as cool as her demeanor and lyrics just as cleaver. Third to hit the stage was Queen Qui of Baton Rouge; her words gave a taste of her experiences that was sure to resonate with those who knew the reality of the struggle. Yung Jewels, also from Jackson, came next in line. With her project, Earth Day, set to release April 22nd, she delivered a few hard-hitters that had the crowd on the edge of their seats and surely gained her new supporters.  Miss Southn Belle later shook the show up when she combined dope lyrics with her impressive voice, showing herself multi- talented. Ever-growing artist Sycamore then set the forefront ablaze with singles from her mixtape, The Queen, before Idaly Maceano took center stage to deliver a raw closing performance that kept the crowd wanting more.
To end the night, well-known Cannon Da Assassin effortlessly led the cypher with emcees of both sexes leaving the audience breathless. For more information on upcoming projects and where to find music from the ladies of #SlaytheFlow Sunday, follow Miss Nina (@_iammissnina), Vitamin Cea (@thevitamincea), Queen Qui (@_que33nqui), Yung Jewels (@thepaidhipster), Miss Southn Belle (@southnbell), Sycamore (@sycamoretvlive), and Idaly Maceano (@idalymaceano) on Instagram. The next #FadetheFlow Sunday will be at Uppercuts Barbershop April 22nd with submissions beginning April 1st. For information on how to submit to be considered for entry be sure to follow Marcel P. Black (@marcelpblack) on Instagram.
Written by Christie “Caleico” Patrick

Feb. 23, 2018, premier promotion company Major League Promotions joined forces with MJ Productionz to bring well-known music artist and rapper Plies to Baton Rouge in the best way possible. The event took place at Club Bella Noche located at 8190 Plank Road with doors opening at 10 p.m.  At the venue, drinks were available at bars on either side of the building, but beautiful bartenders also went into the crowd to provide services to those present.

The packed crowd took at advantage of all amenities provided and got energized to the sounds of the most popular hits of today, and even a few classic throwback jams, as they waited for Plies to grace the stage.  Charles Gillspie of Photos by Charles was also there to take pictures of excited crowd members wanting to have keepsakes to remember their night out. At about 15 minutes before 1 a.m., Plies took to the stage, and the energy of the night went to another level as the crowd cheered for his arrival. Plies then proceeded to perform all of his hits, both past and present, which included “Bust It Baby”, “Ran Off On Da Plug Twice”, and, the most recent, “Rock”. In addition to those hits, there were also moments when Plies pulled a couple of people from the crowd to pay tribute to and celebrate the jiggalator culture of Baton Rouge through dance, including B-Woadie Tha Jiggalator.
Although this event was the first event by one of the two promoting companies, it will not be the last for either of them. To keep up with upcoming events from these companies, follow them both on Instagram. Major League Promotions can be found @ majorleaguepromotions and MJ Productionz @mjproductions_.

Sunday, Feb. 11 at 3 p.m., Tubbi of the Nerdy Bird website and Mark Dub of Sole Lab Radio hosted Showcase Sunday: Valentine’s Day Massacre Edition for hip-hop website ThaAntidote.com at The Parlor in Baton Rouge, giving a stage for local music artists to showcase their skills. Antidote DJ DJ Amp Is 2 Da Maxx was on the turntables as the lineup gave the audience their all and then some. Jizzle Da Underdog opened the show, and John Anthony stepped up second with his crowd-energizing performance. Jeremiah Dawson, formerly known as J.D. the Future, performed next, and Reggae Smirk Da Songbird later graced the stage with hype man Gocki Boi in tow. Savvy, who hails from Jackson, Miss., then set the place ablaze with his lyrics and set the mood for Black History Month by touching on the struggles facing the black community, while D-Matic and Black Da Gutta Baby followed up with songs about the daily struggle and side-piece themed “Dr. Good Joog”. The big finale was headliner and heavy hitter Allie Baby who closed it out in a major way with songs expressing everything from owning one’s confidence to having pride in your blackness.
In addition to the performers, and in honor of Valentine’s Day, raffles were held where winners went home with champagne, chocolates, apparel, and more. Local fashion merchants Designer and H.A.W. (Hustlers at Work) were also in attendance selling their apparel, and lasagna and drinks were available for purchase to those looking to satisfy their hunger. The sponsors for this month’s showcase included Mona Rico Boutique, Villelyfe, Jeansis Clothing, Rouge Factory Media, and Imagez Apparel Bar. Next month’s showcase will be held at The Parlor, located at 705 St. Joseph St. in Baton Rouge, on March 18 at 3 p.m. and will be headlined by Alfred Banks of New Orleans. Any artist interested in being featured in the showcase can submit an electronic press kit via email to @ThaAntidote1@gmail.com; for those who do not have an EPK but are interested in performing, there are services available to have one provided. 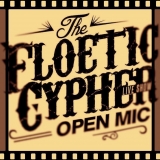 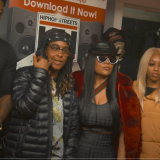 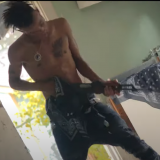 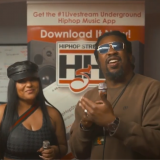