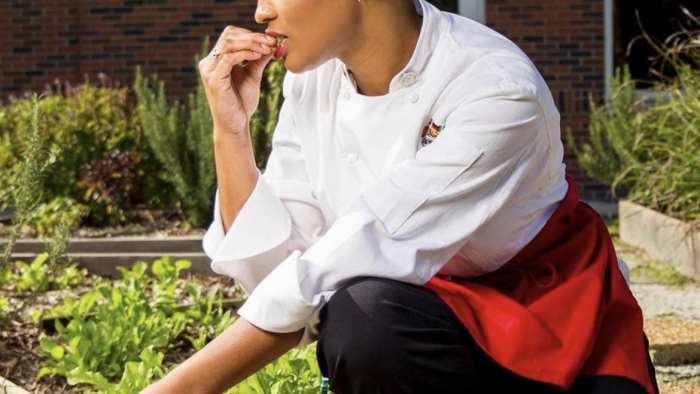 When it comes to Chef Breanna Bolden, things get no more authentic! Chef Bre’s true love for the kitchen can be tasted in her work and seen in the way she introduces you to everything she has to offer. There is no doubt that her dedication to her craft will continue to put her in places to elevate and share her culinary skills with the world. To learn more about her culinary art and how her journey has landed her right where she needs to be, continue reading, and, afterwards, be sure to keep up with her to see when and where you can get your hands on her edible art!

Q: Okay; so, you know I love a good origins story, which is why I’ve got to ask this question. How did your love of food art start?
A: So, I have to start by telling this story. After Hurricane Katrina, I moved to Texas during high school and started cooking, but I could not cook at all! Like, I was blowing up eggs on the stove. Anyways, fast forward some years. I was at Southeastern Louisiana University where my major was communication before switching to psychology because I loved to study the way the mind works. I remember having a professor who told me that you really have to like what you do because you weren’t going to get much out of it if you didn’t. So, hearing that spurred me to start rethinking. During that time, I had gotten my first apartment and would call my mom to learn some recipes from her, but, later, I also started making different cupcakes. So much so that, when people would come to my apartment to study, there’d be cupcakes everywhere! Then, I left SLU in 2013 and moved to Baton Rouge to sit out a year or two when I got a job at Leblanc’s working both as a cashier and in the bakery. While working there, I could tell that one of the girls wouldn’t fully explain things to me, and I wouldn’t grasp it until the black people started teaching me because the white people wouldn’t teach me enough to progress, only enough to get by. To this day I credit a lot of the cake decorating techniques I’ve learned to the black girl that taught me there. A couple years later, in 2015 during Mardi Gras, I met Kenneth Temple, a private chef from Nicholls State. He ended up encouraging me to go to culinary school. I applied to John Folse Culinary Institute and got accepted that summer. Once I got accepted, I took up a second job to save up to be able to afford going to school. Like, I didn’t even have a car at the time. When I went out for the grand opening of the John Folse Culinary Institute, I remember seeing Kenneth in the doorway, and he said, “So, you finally made it.” At that moment, I knew I was supposed to be there. That’s when it hit me that this is what I was supposed to be doing.

Q: Who or what has been your biggest inspiration on this journey?
A: My biggest inspiration has been the pushback. In this industry, as a woman, you have to have tough skin. Initially, I didn’t realize what type of effect having confidence in the kitchen could have on people. I’ve even gotten negative energy from men in the kitchen sometimes. One told me, “Oh you’re smarter than the average bear.” It was a black man who told me this, and I took so much offense. I also remember working with a female family friend in her business, but she didn’t even want to do business with me once I started coming out with my own creations. I’m out here wanting to help, to learn, to collaborate, but, when they say it be your own people, I’m learning that more and more. It’s like crabs in a bucket sometimes, and it hurts my heart to be honest.

Q: How did you create Oven Bits and Pieces?
A: I bought the domain name for it. When I was sitting out of school, I had a journal and would come up with meanings of things associated with my journey. I’m so much of everything; I need bits and pieces. Well, what’s connected to everything in the kitchen? The oven. So, that was how I came up with the name.

Q: Ooh creative! I can dig it. What were some major turning points in your journey?
A: When at Nicholls, I started getting gigs with meal prep, cakes, etc. I had a few other bakery jobs in school too. In 2018, I was doing my last internship, which turned into a job. People used to trash talk the king cakes from the place I worked at, and I thought to myself, “What can I do about that?” That’s when I start selling king cakes. Not long after that, I quit my job because I had so many orders to fill. So, making the king cakes were a major turning point and the official start to things.

Q: What has been the hardest thing about your journey in culinary arts, and what would you say to other black chefs trying to make their way to where you are?
A: Honestly, I don’t like sugarcoating things, but I try to convey my thoughts in a proper way. So, I’d say make sure you’re always zoning in on your craft without trying to take on the stress of having other people help you. It’s true that it’s not going to get done by itself, but you also have to make sure you’re in the right position spiritually and mentally before you allow someone to contribute to the passion you have. Even the people who want to see you be great are still not going to love it the way you do. So, make sure it’s up to your standards before allowing people into your space. Knowing yourself and what you need to do is going to help draw everything you need.

Q: What is your favorite dish to cook?
A: Definitely pastries! It’s such a stress relief for me. Bread or dough in general. Making the dough by hand. I can do all that stuff! It’s almost like Italians when they make pasta. It’s such a finesse you have to have with baking, and that’s my strong suit.

Q: What has been your favorite unique food creation and why this year?
A: Since I’m from New Orleans, my favorite things I’ve made this year are the berry creamy king cakes as well as the pralines n’ cream king cake, which I do for my mom. She requests it every year. The berry creamy is just so pretty! I love the way it looks!

Q: What are some things that people can look forward to from Chef Bre and Oven Bits and Pieces?
A: Other pop-ups. Also, something I’m trying to do more of is engage with my followers. I want to give tips and things to help others in their kitchen. I’ll be putting more of my personality out there. Most people just know me or just know my food. I want everyone to know both sides of the coin so they can understand the whole picture of what I’m trying to do in this world.

Q: Where can people keep up with these new occurrences in your journey with culinary arts?
A: I have a Facebook page. It’s Chef Bre; my personal page is Breanna Bolden. On Instagram, it’s Oven Bits and Pieces and Chef Bre.