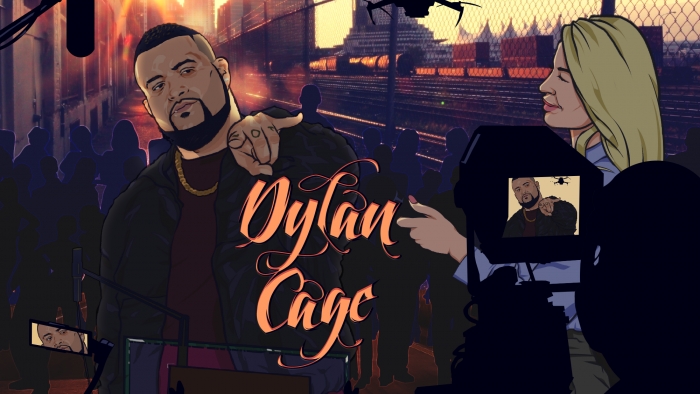 Dylan Cage is back with yet another project this time it’s titled “Cage They Follow”. If you have been following Dylan’s journey in the last few years you’ve known Dylan for his high volume of releases including videos, projects, singles, & more. Dylan’s easily been one of Baton Rouge’s hidden talents that’s ready to be exposed to the world. This new project “Cage They Follow” shows us the diversity of Dylan’s music once again with bangers, conscious content, and music for the world. Cage They Follow consist of production from Hustla, Dosha Burna, Jordan Taylor, & DJ 4 Feva. Great combination of producers based on namesake.

Going into the album the first track is “2 The Money” produced by Dosha Burna. It’s a great way to start off the project because it kind of puts you in the mode of knowing it’s time to get to the money. It’s high energy and catchy.
The next track going into the album is “Hell Yeah”. Hell Yeah is produced by Jordan Taylor and is the first visual released off the topic and was shot by G-14 Classified Films. Once again Dylan displays his versatility and literally comes off as two individuals on this particular record. It’s definitely a vibe. The next record on the tape is “Yes I Did” which is once again produced by Dosha Burna. It’s a catchy repetitive type of song that a lot of people can easily vibe to and enjoy. Dylan throughout this tape shows a certain versatility that you don’t typically get out of artists known for coming out of Baton Rouge.

“Hustle & Stack” is the next record on the tape and it’s produced by Hustla. “Hustle & Stack” comes in with a darker tone than some of the previous records on the tape. Dylan talks about the importance of grinding and hustling which allows him to stack and hustle like he does. Nice record. Leading from that track is “Can’t Complain” which is also produced by Hustla. Can’t Complain” comes in with a more mainstream type feel that sounds like the type of record Drake would record. Once again it’s a very solid record. Following this record is the record “Feelin Me” which is another record produced by Hustla. This is another one of those records that’s considered to be a vibe. This more of a drop the top back type record where you can kick back on Dylan is showing level to those special type of ladies who got it together.

Coming in next is “Y U Mad” now when It tell you this record is some serious pressure it really is. This record is yet another record produced by Hustla but this one comes in on a whole different level of energy. This one is a song that’ll have your car jumping like you have a gorilla in the trunk and Dylan has the lyrics to match the energy. Easily one of the best tracks on the album. The next record coming in after that is “Won’t Last” featuring the only feature on this album Hey Daem which is also Dylan’s brother. Hustla shows his production versatility with a whole different type of record in “Won’t Last”, the best way to compare the production’s vibe is Gorilla Zoe “Lost”. Daem blesses the hook with a very catchy hook and Dylan shows his  versatility again on the verses.

We’re near the end of the tape and the next record up is “All Eyes On Me” produced by DJ 4 Feva. Once again another solid record from Dylan. To wrap up the album is the last track is “For This” produced by Hustla. It’s a great record to wrap up the album. It sums up what Dylan is about and the vibe on this particular record.

Overall, Dylan has put together yet another good project with “Cage They Follow”. If you haven’t already, be sure to check out the album. Highly recommended.