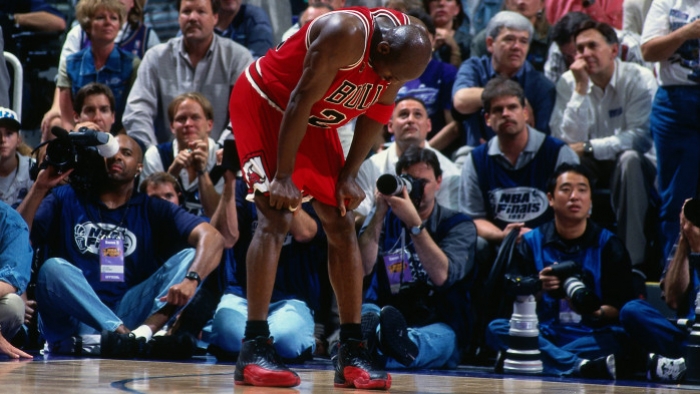 Now, this article is not about discrediting Michael Jordan but at the same time it’s to get people to think a bit deeper in regards to Jordan’s prime championship years and how his time was perfect timing.  As we know, Michael Jordan is considered the GOAT when it comes to modern day basketball. In the last 30-40 years it’s only been a few players in contention to this title, Jordan, Bird, Magic, Kareem, Lebron, & Kobe, even though we could possibly throw in a Duncan, Shaq, or Olajuwon into the equation.

The reason why Jordan is considered the GOAT is due to his scoring prowess, tenacious defense, and win at all costs philosophy that help lead the Chicago Bulls to 6 championships in the 90s including 2 3peats. Jordan also showed us that he could be as successful outside the court building a conglomerate of business endorsements including the Jordan brand, Hanes, Gatorade & more. For the last 20+ years he’s had one of the most recognizable images in America which only adds to his aura of the GOAT.

Coming into the league Jordan from day one was a prolific scorer who we could see was physically more gifted than everybody else on the court. We’ve seen the proof from Jordan dunking so gracefully from the free throw line to scoring 63 on a legendary Boston Celtics team. Pretty much the 80s was sowed up by the old law of teams like the Lakers, Celtics, 76ers, & Pistons which were way heavier on talent than Jordan’s teams of the 80s, but once the 90s hit it was Jordan’s time. He first eliminated the Bull’s arch nemesis the Detroit Pistons then beat Finals mainstays the LA Lakers, who were on their way down with the retirement of Kareem, an aging James Worthy, a young Byron Scott, a young Vlade Divac, and a still good but worn out Magic Johnson. After nabbing his first ring, Jordan repeats and wins 2 more championships matching up with Clyde Drexler’s Portland Trailblazers & Charles Barley’s Phoenix Suns. Both great teams but no match for MJ & the Bulls. One thing about the 90s that I would argue is that it wasn’t that many great shooting guards in the 90s for Jordan to match up with. You could argue and say Clyde Drexler was the best shooting guard that Jordan matched up with throughout both Finals Championship runs.

Also, during Jordan’s first retirement after his first 3peat the Houston Rockets ended up with a 2peat on the back of Hakeem Olajuwon. Throughout this two year run Hakeem showed dominance over the elite centers of the league which was a position loaded with great bigs.  Now, Jordan did come back in mid-season for Houston’s 2nd run only to be eliminated by Shaq, Penny, & the Orlando Magic. Who’s to say that if Jordan played the whole season he would of been able to get past either the Rockets or Magic. Both teams had dominant players with a guard that could hold their own in Hardaway & Drexler.  Also, the Bulls lost Horace Grant to the Orlando Magic.

By the time they got to the last championship the Bulls were running on fumes and the team was pretty much at odds with the front office. If Michael would of stayed another year and Scottie & Phil stayed, Scottie started his decline the next season. Scottie’s PPG dropped down under 15 points a game and was now 33 years old. Scottie was going through a downwards plight. Even if Michael would of stayed he would of needed additional help, especially against a young Tim Duncan and a still solid David Robinson in the paint which would of been a weakness to the Bulls at this time. With the way the NBA was changing at that time and with the decline of players around Jordan I believe Jordan got out at the right time. On top of that the league was peaking with more guards who had similar skill sets (Kobe), athletic abilities (VC), and an overall ability to get buckets (A.I. & T-Mac) to where it might of been Jordan’s time to go.